There are 15 images tagged with “stars”. 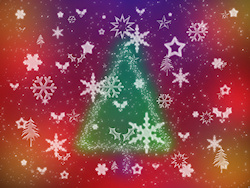 I had almost forgotten about this little Photoshop play I did years ago, but I think it makes a nice wallpaper. It makes me think of Christmas candy. 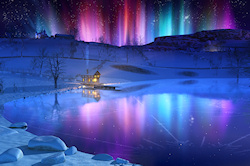 Anyone up for ice skating? 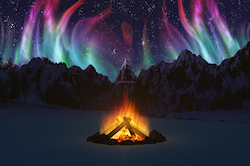 If you follow the path in Welcome to the Cwm down to the bonfire and look to the right, you might see the Northern Lights.

This is the Christmas version of my seasonal “snow globe” idea.

“‘Where is he that is born King of the Jews? for we have seen his star in the east, and are come to worship him.’
And, lo, the star, which they saw in the east, went before them, till it came and stood over where the young child was. When they saw the star, they rejoiced with exceeding great joy.”
December 13, 2016

I was trying to make a picture with the Northern Lights. I'm not sure it turned out very authentic, but I thought it made a nice picture anyway.
Created in Vue 11 Complete with minor adjustments in Paint Shop Pro. 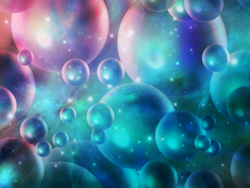 Down the Empyrean Stream

This space fantasy image was inspired by Empyrean from Mike Oldfield's Music of the Spheres. 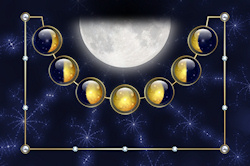 A Month in the Life of the Moon 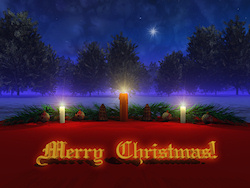 A simple Christmas desktop made in Vue. I like to reuse my abstract designs as textures, so the sky texture comes from Chaos Tie-Dyed, and the red and gold balls from Rubies & Gold. 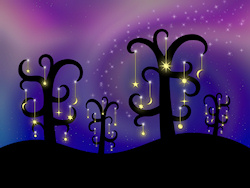 The celestial orchard where stars and moons are grown. Created entirely in Paint Shop Pro. I'd had the idea for this image in my mind for a while, and finally got around to making it. I got a lot of practice with the pen tool, and these tree shapes might show up again. 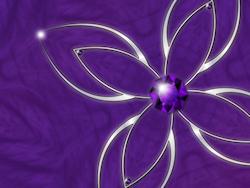