There are 2 images tagged with “pillars”. 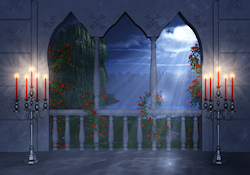 “Silence was pleased: now glowed the firmament
With living sapphires: Hesperus that led
The starry host, rode brightest, till the Moon
Rising in clouded Majesty, at length
Apparent queen unveiled her peerless light,
And o're the dark her Silver Mantle threw.”
— Paradise Lost

I created this picture in Vue to use for a mural on my bedroom wall.