There are 25 images tagged with “fractal”. 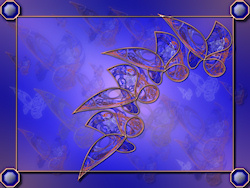 I wanted to try something metallic besides gold and silver, and I remember my high school Chemistry kit had a copper compound that was bright blue (azurite?), so I decided to try them together. Then these butterflies showed up fluttering across my screen and offered to pose for me, so here they are! Actually it's an Apophysis fractal that I thought looked like a butterfly. You have to have a good imagination working with fractals! This was also another attempt at drawing faceted gems. 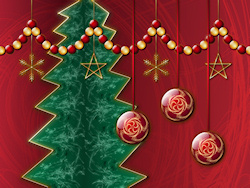 This Christmas-themed illustration uses several Apophysis fractals for texture. I had seen another wallpaper with hanging ornaments like this and wanted to try something similar. The golden swirl fractal is one of my particular favorites, and it worked well as an ornament design. 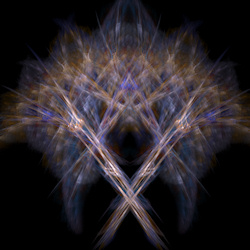 Just a simple fractal that I thought looked like a sheaf of harvested grain. Or you might see one or more faces in it - I guess it depends on your imagination! This was one of my early fractal designs, in this case with very little editing. It was created with the Apophysis fractal flame creater/editor. 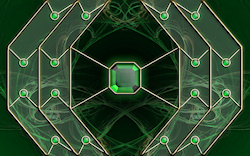 Hiddenite , or Lithia Emerald, is a rare green gemstone. It was discovered in western North Carolina in 1879, and named after the geologist William Hidden.

This picture of course is not a photograph of actual hiddenite. It's a combination of my drawing with an Apophysis fractal for the background. I laid out the design to give the effect of heading into a dark cave where such gemstones might be mined. This piece was also an experiment in drawing faceted gems - they're harder than the round orbs. 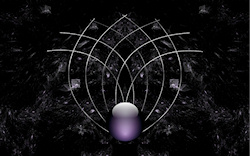 This was one of my first fractal/abstract works. I was practicing how to make the jeweled orbs and metallic filigree. I think the jewel turned out pretty well, but the filigree was still a bit rough around the edges. I chose the title because I like the word “dusky” as well as the the dark grey/blue/purple color it sometimes signifies. A few months later when I got a grey kitten I named him “Dusky” too.